Greetings blog followers, I recently informed you all in another post that I am autistic. Over a week ago a page in the UK, particularly Glasgow asked autistic people what flash designs we would like to see for a charity. Many of us, including myself asked for the neurodiversity symbol also known as the rainbow infinity. I would have screens of this except I did not expect that not only would they not listen but in an effort to avoid accountability they deleted the thread.

I would not even be writing this if after having done puzzle piece flashes and donating to an organization many of us asked to be switched to a more autism positive charity such as ASAN, they had admitted to the mistake and perhaps apologized. Instead, when we reviewed them they doubled down and insisted they were right to do this and even told one autistic person “your comment truly does not matter to us.” And then justified this as any “Autism warrior parent TM” does by saying “This comment is actually written by staff member who is a parent of autistic child so mind your comments.”

I find it irritating that a parent of an autistic child choose to tell an autistic person their voice didn’t matter and that they should mind their tone. I find it disheartening that because many of us were in the United States They ignored us but Americans weren’t the only ones speaking up. When autistic people in their community also left reviews concerning this, they blocked all of us who left reviews from their page which I shall link here: Rock’n’Roll Tattoo and Piercing Glasgow

Businesses, when we say no puzzle pieces and you ignore us we will come for you. I will come for you, for myself, for my kids and for the community I have found home in. You can try to silence us but the internet is forever and you can’t close google reviews. We were polite, informative and direct. We offered a substitution a preferred symbol and charity, you ignored us and attempted to silence us, Rock’n’Roll Tattoo and Piercing Glasgow but I have the screens of my reviews and you won’t prevent others from seeing the truth.

For others who are reading this and had commented on the event mentioned you can leave a review on Google by looking up: Rock’n’Roll Tattoo and Piercing Glasgow
25 Gallowgate, Glasgow G1 5AA, UK 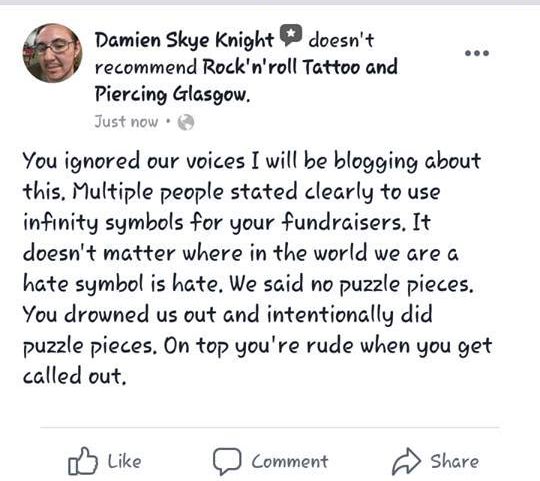 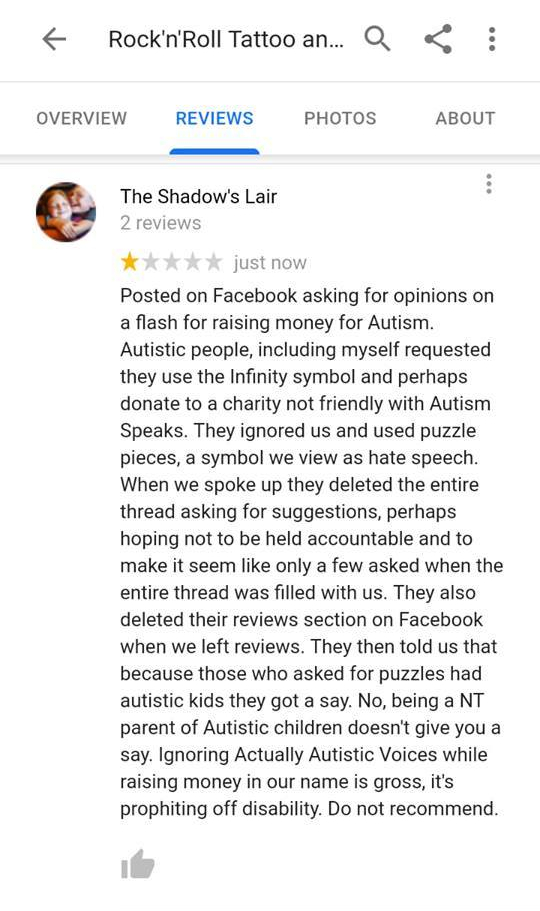 Remember to support us on Patreon

This site uses Akismet to reduce spam. Learn how your comment data is processed.

Writing is an exploration. You start from and learn as you go

writings of a lost soul